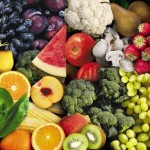 FRUIT AND VEGETABLES, those health inducing, anti-oxidising good guys of our diet, provided the theme for this week. Lots of songs, across quite a few genres, so it was a lot of fun. We opened the show with Liz Phair and Material Issue singing THE TRA LA LA SONG from a very cute album Saturday Morning Cartoons’ Greatest Hits.

The great Nina Simone got all educational on us with the story of Adam and Eve and their taste for FORBIDDEN FRUIT and then The Paul Butterfield Blues Band kept things moving along with DIGGIN’ MY POTATOES.

Then it was the late Nick Drake with a beautiful meditation on the effect of fame: FRUIT TREE. So sad that he died at the very young age of 26.

K.T. Tunstall raised the mood with BLACK HORSE & THE CHERRY TREE. Here she is at her first U.K. television performance. The show is ‘Later with Jools Holland’.

Junior Brown loves a woman who’s good in the kitchen and he sings all ab0ut it in CATFISH AND COLLARD GREENS while Lynyrd Skynyrd  are totally seduced by GEORGIA PEACHES. But if you want to talk sexy, you can’t go past the gorgeous Julie London as she relates how she feels about WATERMELON MAN.

I didn’t think it was possible for a white boy to sing reggae, but UK band UB40 proved me wrong with CHERRY OH BABY. Check out the video clip and see what you think:

And here’s proof positive that the 70’s was a decade to be reckoned with – it’s The Brothers Johnson with STRAWBERRY LETTER 23. And did you know that the strawberry is the only fruit that has its seeds on the outside? True.

Ray Charles’ Genius Likes Company album has supplied a number of tracks for me over the time that I’ve been presenting Theme Park and that’s because it’s a great album. This week it was SWEET POTATO PIE where Charles is joined by James Taylor.

An interesting combination in a triple play followed starting out with Goldfrapp and BLACK CHERRY, followed by The Beach Boys with VEGETABLES and The Ting Tings with FRUIT MACHINE, which I think might really be about a certain gaming device which is in turn a metaphor for something else, anyway, so what the hell. Check out the Ting Tings, another great indie duo. It seems to be the thing these days.

A couple of blasts from the past rocked us into the second half of the show: Little Richard explained what he meant by TUTTI FRUTTI, (I think), and Dee Dee Sharp got everyone up dancing to MASH POTATO TIME. I love this older stuff so much, I’m going to put both clips up. Little Richard’s is actually a performance he did in 1995 but Dee Dee Sharp’s is pure 60’s.

I love the occasional piece of comedy so was really happy to have stumbled across Stan Freberg’s version of the BANANA BOAT SONG. And just as funny, in their own strange way, are The Presidents of the United States who claim to be moving to the country where they’re going to eat a lot of  PEACHES.

I was accused of stretching the topic a bit when I included Marvin Gaye’s I HEARD IT THROUGH THE GRAPEVINE, but hey, grapes are fruits – right? And besides, it’s a classic.

Talking of classics, Ella Fitzgerald and Louis Armstrong’s CALL THE WHOLE THING OFF is a fabulous tune about opposites attracting. “You say tomato…..”. Love it. Ageless.

In complete contrast, we followed with The Kills and SOUR CHERRY from their 2008 album, Midnight Boom. Check them out on this clip:

Couldn’t leave out BANANA PANCAKES by Jack Johnson. Yummy. And the banana pancakes aren’t bad either.

Next up it was PINEAPPLE EXPRESS from Huey Lewis and the News and we  followed with the ultimate Tex-Mex supergroup, The Texas Tornados, singing GUACAMOLE.

Billy Holiday gave us, possibly, her most famous recording, STRANGE FRUIT, released in 1939. The song condems the lynchings of African Americans that occurred mainly in the South, but throughout the United States, during this time. Here’s some rare footage of one of the first anti-racism songs ever:

Difficult to know how to follow such a powerful song, but couldn’t go too far wrong with a great piece of instrumental jazz: Dizzie Gillespie’s PICKIN’ THE CABBAGE. And then it was  JJ Cale with CHERRY STREET and the wonderful Tony Joe White with POLK SALAD ANNIE.

Before I knew it, the two hours was all up and it was time to sign off with E.G. Daily’s version of LIFE IS JUST A BOWL OF CHERRIES, which apparently means that life is meant to be simple and pleasant.

Next week, is my last show before I take a 2-week break so the theme will be HOLIDAYS. Let me know if you have any favourites you’d like me to play.