AGE AIN’T NOTHIN’ BUT A NUMBER!

We Baby Boomers, in particular,  seem to be obsessed with aging so I thought it was time to dedicate a show to the older generation. It was also Seniors week  – not that you would know it, as there wasn’t one thing organised to celebrate seniors up here in Northern New South Wales, that I could make out. Now I know that we live in the youth obsessed tourist town of Byron Bay, but come on! One day it will be you and I that will be shuffled into the old people’s home (if we can afford it!). Ah well, there’ll always be the music….

Even Barbie, who turned 50 last week, has fallen prey to a mid life crisis: ‘Totally Stylin Barbie’ has landed in the toy stores, complete with trendy threads and several temporary tattoos. Help!

I started the show with the Who’s ‘My Generation’. Roger Daltrey sang “I hope I die before I get old” when he was a 21 year old, in 1965, and he’s still singing it 44 years later! Rock’n’roll has always been devoted to a cult of youth and beautiful corpses. Meanwhile our musical heroes and heroines have turned into reunion tour veterans. Being an aging rocker comes with a lot of irony and a smidgeon of  indignity along with the continuing glory, or so it seems.

Aging, mortality, hard-done by women and dirty old men – the themes aren’t confined to rock. Other musical genres covered it all long ago. Pop, Blues, Soul and, not to forget, country – those cowboys have been churning out hits about the sunset years for decades. So it was a fairly eclectic playlist this week – Jazz, Blues, Rock’n’Roll, Country and even some Hip-Hop! Songs dedicated to our older relatives, philosophical musings on time’s passage and a couple of anxious songs about diminished potency. There were a couple of cheeky songs and  some very touching music recorded, perhaps not surprisingly, by some of our older musical icons. It turns out that, dying after you get old does have some advantages! 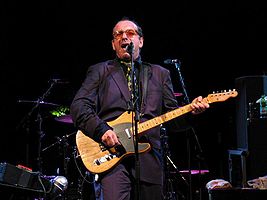 Fats Waller and Bill Withers sang a song dedicated to their Grandad and Grandma, respecitvely,  and then it was onto Elvis Costello with a song that Paul McCartney co-wrote, ‘Veronica’. This is quite a brilliant number from 1989 about an elderly woman slipping into senility. Sassy songstress Lily Allen followed with her 50cent cover ‘Nan, You’re a Window Shopper’ and how could we miss out on ‘Little Old Lady From Pasadena’ from the Beach Boys? That’s Elvis C. in the pic above, in 2005, still rockin it out. Bless.

Steely Dan’s ‘Hey Nineteen’ struck a note with more than one of my girlfriends! As the song goes, as hot as it is having a girlfriend 30 years your junior, it’s kind of a reality check when she’s never heard of Aretha Franklin: “We’ve got nothin’ in common, We can’t talk at all”. No kidding. So here’s a video of a live concert in 2006,  for all those old guys still chasing young skirt….. listen well!

We played a quite a bit of the Beatles today. Sad when you think about it. They wrote quite a few songs about aging and both George and John died relatively young. ‘When I’m Sixty Four’ and ‘In My Life’ are both classics. Buddy Guy and Junior Wells gave us a great rendition of ‘In My Younger Days’, followed by my new favourite, Seasick Steve, with ‘Rockin’ Chair’. We couldn’t leave out Neil Young’s ‘Old Man’ with James Taylor on banjo (tuned like a guitar) and Linda Ronstadt on back up vocals. Here is a video of a concert Young did in London, in 1971, where he explains the origins of the song. He looks so young here – well it was nearly 40 years ago!

My Roy Orbison song this week was quite poignant: ‘Life Fades Away’. And so was ‘End of the Line’ by the Travelling Wilburys. I happily sent out birthday wishes to several of my listeners with the Beatles recording of ‘Birthday’, and then finished the show with the amazing Jimmy Durante singing ‘Young at Heart’. Yep, age ain’t nothin’ but a number.

End of the Line  – Travelling Wilburys

Next week I’ll be tackling the theme of Communication. Suggestions for songs always apprecicated.