This week’s theme is one that is close to my heart: cats and dogs. I think you are either a cat or a dog person and anyone who says that they like both equally are in denial. Me? I’m absolutely a dog person, although I have always had a cat and I’ve had a habit of only ever having had a ginger cat. Apparently ginger cats are nearly always male. You can get a ginger female, but it is incredibly rare.

In any case, I tried to give our canine and feline friends fairly equal time when it came to choosing the music and we started off with ‘Who Let the Dogs Out?’ by the Baha Men. I knew that the ‘Baha’ was short for Bahamas, which is where the group were all born, but I had no clue as to what their style of music – ‘Junkanoo’ – was about. I’ve since done a bit of research.

Junkanoo is more than just a musical style; it represents a whole cultural phenomenon. The music itself is very primitive and incredibly infectious. The basic musical instruments are made in the Bahamas and consist of the drum cowbells, horns, whistles, scrapers and brass. Twice yearly huge Junkanoo street parades are held where special Junkanoo costumes, music and dance are on display. It sounds absolutely amazing. Find out more at http://junkanoo.com

‘Who Let the Dogs Out?’ was released in 1998. The video clip still stands up as great entertainment in its own right, so here it is for you:

Thanks to all those dog and cat lovers who agreed to contribute to our vox pops. Loved the comment: “Dogs have masters and cats have slaves.” My little dog Charlie is 11 now and we have been through thick and thin together. He is my lttle mate. Charlie even has his own blog, although he hates the fact that he has to wait for me to type it up for him. Charlie put in a special request for some classic rock. He’s a bit of a boy like that. So, especially for Charlie, I played some Led Zepp – ‘Black Dog’ (in memory of Charlie’s companion Coco who passed away last year) and AC/DC with ‘Givin’ the Dog a Bone.’

‘Fraid Pussy Bite Me’ is a fantastic piece of early Calypso from the King of Calypso, Mighty Sparrow. Born in 1935, he is still going strong at 73 years of age. His lyrics are famous for being witty, ironic and ribald. He also frequently comments on social and political issues in his songs and recently endorsed Barack Obama and presented him with a CD of a song he had recorded in his honour, “Barack the Magnificent”.

The track I played, ‘Fraid Pussy Bite Me’ is from The Renaissance CD, a hot compilation of classic tracks where Sparrow displays his versatility. Well worth the search if you can find a copy. 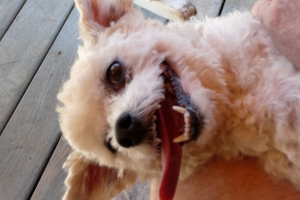 It’s been suggested that pets resemble their owners. In which case it should be pointed out that my pup Charlie is in incredibly good shape for his age, but Felix the ginger Abyssinian, talks way too much. Charlie has insisted that I include a photo of him which was taken recently while he was being given a massage. I suppose that I should add that, yes, we are both also a bit goofy!

My Roy Orbison song this week was ‘Hound Dog Man’ from the album Blue Angel. And I really covered a lot of other musical territory, crossing generations and genre with wild abandon. Check out the complete playlist below:

Who Let the Dogs Out –  Baha Men

Call Me The Wolf – Howlin Wolf

How Much is That Doggie in the Window? – Patty Page

The Love Cats – The Cure

Givin the Dog a Bone – AC/DC

Year Of The Cat – Al Stewart

Next week: to celebrate the Oscars, I’ll be playing music from all my favourite films (not necessarily Oscar winners).

Valentine’s Day – the most romantic day of the year? Or a stressful, sentimental, overly commercialised nightmare? Whatever your opinion, it was time to enjoy a whole lot of songs with the word ‘heart’ in them. Because, let’s face it, this is a theme show and I’m not above exploiting this silly holiday for my own benefit either!

This week I want to give a big shout out to those of you who listen to the show via the web. I know that Alex listens every week in Sydney (because he texts me during the show when he particularly likes a track!) and Zoe and Steve have been listening in Tokyo. Isn’t technology wonderful!

My discovery this week was Little Miss Cornshucks. Who? You may well ask. To be honest I hadn’t heard of her either but Hudson from BayFM’s ‘Postmodern Backlash’ turned me onto her and I’ve got to say, she is amazing. She was a unique live performer who riveted audiences from LA to Chicago to New York in the post World War 2 years.This was the period of the “after-hours blues”, between swing and rock’n’roll, when the break between jazz and popular R&B was not yet a chasm.

She was a huge influence on performers like Ruth Brown. And Judy Garland’s schtick, of sitting on the edge of the stage and communicating directly to the audience, is taken straight from Little Miss Cornshucks performance. I found a compilation of her recordings on both Amazon and ITunes, if you want to check her out for yourself.

The 101ers were a pub rock band from the 1970s, notable as being the band that Joe Strummer left to join the Clash. The group was named for the squat where they lived together: 101 Walterton Road. The 101ers were supported by the Sex Pistols at the Nashville Room on 3 April 1976, and this is when Strummer claimed he saw the light and got involved in the punk scene. Joe Strummer commented on this event in the Don Letts documentary ‘Westway to the World’ on the end of the 101ers by saying “Five seconds into their (the Pistols) first song, I knew we were like yesterday’s paper, we were over.” I played Keys To Your Heart which still stands up today, so maybe he was being a trifle hard on the 101ers, but hey, we got The Clash. So no complaining. Have a listen to the 101ers courtesy of YouTube.

A bit of trivia: Did you know that Kiki Dee was the first white British artist to be signed by Tamla Motown, releasing her first Motown album in 1970 (Great Expectations). She is better known for her duet with Elton John, and that’s the song we played this week – ‘Don’t Go Breakin’ My Heart’.

The two hours just flew by and, as usual, I had a lot of fun. If you aren’t in a relationship at the moment, think of this Saturday February 14 as “Singles Awareness Day”. Otherwise, remember what Anais Nin had to say:

“Age does not protect you from love. But love, to some extent, protects you from age.”

So, for all you music lovers out there, here is the playlist:

Hearts Of Stone – The Jewels

Keep Your Hand On Your Heart – Little Miss Cornshucks

Breakin’ Up Is Breakin’ My Heart – Roy Orbison

Heart Full Of Soul – The Yardbirds

Heart Of Stone – The Rolling Stones

I’m Hanging Up My Heart For U – Solomon Burke

Ruler Of My Heart – Irma Thomas

Piece Of My Heart – Big Brother & The Holding Company

Owner of a Lonely Heart – Yes

He Will Break Your Heart – Jerry Butler

What Becomes of the Broken Hearted – Jimmy Ruffin

Zing, Went The Strings Of My Heart – The Coasters

Next week, its ‘Cats & Dogs’. Hope to have your company.

What with the holiday season just around the corner, it was surely time to do a show that travelled around the world. As usual, never enough time to give a good theme like this its due, but we gave it a good shot. Hardly touched on Europe and never got to the UK, so I can see a show on the Brits looming on the horizon.

Started the show with a bit of bubblegum. Not my usual fare, but the song ‘Around the World’ by Aqua (remember them – “I’m a Barbie girl, in a Barbie world…”) was just such a cute choice to open the show, I couldn’t resist.

Once again I included  a song from C.W. Stoneking (Jungle Lullaby). When I first heard him sing I thought, “that’s got to be the bastard child of Tom Waits and Bessy Smith”. And I’m not the only one to have made that kind of comment (Rolling Stone for one). We had the opportunity to compare when I also played Tom’s “Telephone Call From Istanbul”. Both performers use musical personas to great advantage, but for my money Tom has got it all over C.W. (who I love btw).

Tom Waits has such a distinctive voice. It has been described by critic Daniel Durchholz as sounding “like it was soaked in a vat of bourbon, left hanging in the smokehouse for a few months, and then taken outside and run over with a car.”

The song “Telephone Call From Istanbul” is from his album “Frank’s Wild Years”, which before it was an album, was a musical play co-written by Waits and staged as an off-Broadway musical in 1986. It was directed by the actor Gary Sinese and had a successful run at Chicago’s famed Steppenwolf Theatre.

This week’s  playlist covered a lot of ground and moved between pop, r&b, jazz, calypso, rock and punk. The Ryan Adams song “New York, New York” is particularly interesting because the music video was shot on September 7, 2001, the week before the September 11, 2001 attacks. The twin towers of the World Trade Centre feature prominently in the background while Adams is in the foreground singing “I’ll Always Love You New York”. It’s not surprising that the clip received a large amount of air time on MTV in the days following the attacks. I’ve included the clip here and then the complete playlist follows.

Around The World –  Aqua

Going Loco Down In Acapulco – The Four Tops

Down In Mexico – The Coasters

The Boy From Ipanema – Julie London

Back in the USA – Chuck Berry

Georgia On My Mind – James Brown

I Drove All Night – Roy Orbison

If You’re Going to San Francisco – The Byrds

Made In Japan – Buck Owens

Rock the Casbah – The  Clash

When In Rome – Blossom Dearie

Oh, and I nearly forgot: A recipe for the party season: “Tijuana Taxi Cocktail”

Scale the ingredients to servings.

Pour tequila, curacao, and schnapps over ice into large highball glass. Fill with lemon-lime soda and garnish with orange slice and a cherry. Enjoy!

Next week: Xmas week (can’t believe it!). The theme will be ‘Eatin’ and Drinkin’.