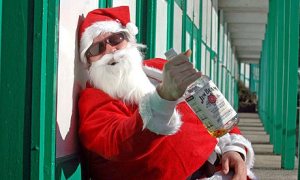 Now, you may think I’m a bit behind the eight ball, doing a show on RESOLUTIONS AND FRESH STARTS in mid January, but I have a policy of not even thinking about New Year Resolutions until after my birthday, which is around this time. I’m not prepared to give up my wicked ways until those celebrations are well out of the way. And, to be honest, that could take up to 6 months at least.

So, I’ll allow the playlist to do the job for me. The wonderful Nina Simone set the tone with FEELING GOOD. She’s full of optimism because it’s a new day, a new life and she’s feeling good. I wonder how long that lasted? Because, as we all know, new resolutions and fresh starts are often accompanied by regret and, unfortunately, they almost always carry the potential for failure. But, let’s at least try and maintain some hope.

The Allman Brothers Band have had their ups and downs, so on a song like CHANGE MY WAY OF LIVING they’re sounding mighty ambitious. But hey, let’s give them the benefit of the doubt.

It was great to have Blues/Roots duo The Fridays in the studio for a chat and some live music. They’re from Adelaide and presently in Byron performing and promoting their EP Woh Oh. Kimberly McKenzie and Kelly Breuer’s original material melds rock out riffs with beautiful harmonies. A couple of the songs had me laughing out loud.  As well as playing ROMANCE COMEDY from their EP we

were able to have them perform two other numbers live and it was such a pleasure. If you get a chance to catch them perform, anywhere, don’t miss out on supporting some fantastic up and coming Australian talent.

Motown giants The Supremes and The Temptations got together to record a version of Dee Dee Warwick’s I’M GONNA MAKE YOU LOVE ME and it became a huge hit for them in 1969. We followed that with the very appropriate NEW YEAR’S RESOLUTIONS from two more soul greats, Otis Redding and Carla Thomas.

If only Thin Lizzy’s Phil Lynot had followed through on his resolution, he might still be with us. Instead,  I’VE GOT TO GIVE IT UP, is a sad memorial to this amazing talent who died at 36.

The Who are convinced that they WON’T GET FOOLED AGAIN. A good resolution if ever I heard one, but, like a lot of resolutions, not that easy to keep.

Mama Kin is very convincing on her resolution song I’M GONNA DO IT. As is Bobby Bland who says he AIN’T GONNA BE THE FIRST TO CRY.

John Legend gets a little bit of help from Snoop Dogg on I CAN CHANGE. On this video clip he carries the day on his own (and you get the bonus of Spottie as well). Its a live performance in London with a terrific band and back-up.

George Thorogood & The Destroyers contributed one of those songs full of  promises. You know the ones:  men make them in order to win the woman of their dreams. In this case George says I’LL CHANGE MY STYLE.

Nick Cave, apparently has all the right intentions, he just has trouble delivering on his resolutions because RIGHT NOW HE’S A ROAMING. Steve Winwood knows that if you’re really serious about wanting a fresh start you have to make it happen WHILE YOU SEE A CHANCE.

Somehow I don’t think Ian Dury and the Blockheads were serious at all when they sang I WANT TO BE STRAIGHT.

Princess Superstar’s QUITTING SMOKING SONG was edited a little, otherwise we wouldn’t have been able to play it on radio, and that would have been a pity, I reckon. Meanwhile, Black Kids are promising I’M NOT GOING TO TEACH YOUR BOYFRIEND HOW TO DANCE WITH YOU. Quite right too.

A fun couple of songs to exit on: Mary Martin and the cast of South Pacific with I’M GONNA WASH THAT MAN RIGHT OUT OF MY HAIR. And one of my favourites, the wonderfully eccentric and optimistic Jonathan Richman, who knows all about fresh starts on I’M JUST BEGINNING TO LIVE.

Thanks to The Fridays for coming in and entertaining us in the first hour of the program. Don’t forget they’re performing at the Rails Hotel in Byron Bay on Thursday January 20th so get along and support them.

Thanks also to Lina, Chilla, Shel, Allan, Andy and Victoria for letting us know what their New Year Resolutions were for this year.

Next week’s show will be ALL AUSTRALIAN. Lots of nostalgia and some new stuff as well.

Until then, here’s this week’s playlist:

Change My Way Of Living / The Allman Brothers Band

I’m Gonna Make You Love Me / The Supremes

Got To Give It Up / Thin Lizzy

Won’t Get Fooled Again / The Who

I’ll Change My Style / George Thorogood and The Destroyers

I Want To Be Straight / Ian Dury and The Blockheads

While You See A Chance / Steve Winwood

One Way Or Another / Blondie